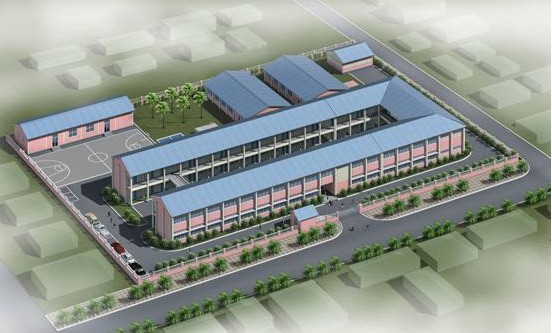 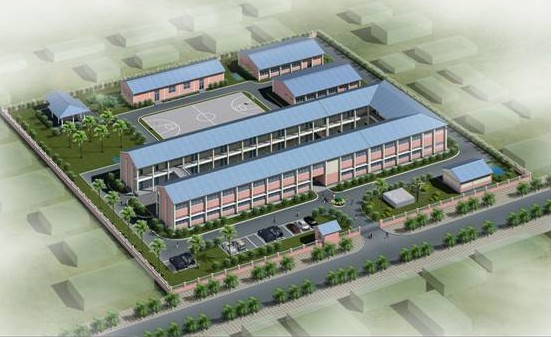 The School Construction of the Ministry of Education of Angola

Project background
Abundant in petroleum and diamond and ranking the third in the world in terms of the output of coffee, Angola is a breathtaking and prolific country, and also suffers constant chaos of war fairs.

Having been the colony of Portugal for over 500 years, Angola won its independence in 1975; afterwards, it is unfortunately plagued by the civil war. In April 2002, the government of Angola signed ceasefire agreement with the anti-governmental armed force alliance, thus curtaining up the 27-year commotion. The constant war affairs reduced the nation into an isolated and backward country, with its social economy being terribly hindered, millions of people died and hundreds of thousands of people disabled, and the country falls back to be one of the most depressed nations of the world.

Upon the announcement of the conclusion of the civil war, the Angola government attaches great importance to the economic construction. In order to facilitate the recovery and reconstruction and promote the economic and trade cooperation between both sides, the Chinese government signed agreements with the Angolan counterpart on the cooperation in petroleum, credit and trade. Premier Wenjiabao’s visit to Angola and the convention of Sino-Africa Forum also accelerate the development of trade and business between the two nations. And this construction project undertaken by the Company is also a sub-project of this move.

Project introduction
In accordance with the “Framework Agreement of Exchanging Credit with Petroleum” signed between the Export-Import Bank of China and the Ministry of Finance of Angola on January 21, 2005, the Company won the tender of undertaking the construction of 36 schools under the Ministry of Education of Angola. On March 9, 2005, both sides signed formal contract, with the total investment of the project being RMB 240million Yuan. On August 29, 2005, both sides further signed amendment contract, requiring the project to be completed by stage and the first stage covering the construction of 10 schools and the restoration of a school.

The first stage of the project involves totally 11 schools, thereof six are newly-built institutes of technology, four are middle schools and the one remaining to be restored is an agricultural college, the entire project includes the providing various equipment to the 60 labs (workshops) of the 11 schools and furniture to the 162 classrooms and 130 offices (including meeting rooms), as well as offering sports facilities to the 11 gyms of the schools. The equipment provided by tens of renowned manufactures at home and overseas ranges from auto, tractor, machine tools, to tube, cut film and software. The first stage is completed on March 20, 2006 upon 12 months of painstaking effort. During the construction period, the project quality is regarded as the focus, so as to ensure the project quality to meet the standard. Therefore, the Comapny won the recognition and appreciation from the owner and supervising units.

Owing to the success of the first stage construction, both sides signed the second stage project contract on July 28, 2006, including the contracting of four institutes of technology, six middle schools and five colleges of administration. Besides undertaking the construction of the fifteen schools, the Company also takes charge of offering 10 kind of equipment totaling 25,165 pieces of multi-media, lab equipment of physics, chemistry and biology, machine tools, instruments, experiment platform, robot, and sports facilities. The second stage is started on July 30, 2007 at the order the owner and lasts 13 months.

Project influence
The completion of the first stage project realized the Angolan government’s dream of reconstructing the educational field, built up completed middle and high schools in large cities of Angola, enabled the students to enjoy the access to well-rounded educational facilities, and rendered guarantee to the flourishing of the nation. The president of Angola showed his appreciation about and spoke highly of the project, acclaiming that the Company made great contribution to the education of Angola and the friendship of both nations. Moreover, the completion ceremony of the eleven schools had profound influence in the local area, and the Angola national TV station and various media also covered the event, which fully embodied the keen concern from the Angolan government and the local people. Having won the unanimous applauses from the local, the success of the project also elevated the reputation of the Company in Angola.

The signing of the second stage contract signified the recognition from the Angolan government and the local people. Based on the experiences of the first stage, the Company will continue striving forward to score resplendence.


Established in 1985, CHINA NATIONAL MACHINERY COMPLETE INDUSTRY ENGINEERING CORPORATION (hereinafter abbreviated as CMCC),with the ratification of China Economy ™ committee, is set up on the basis of the former administration Bureau of Complete Project belonging to the Ministry Industry. CMCC, an economic entity as an independent legal person, is a comprehensive state-owned company with the integration of technology, industry and domestic and overseas trade and with the qualification of contracting project at home and abroad. Our main business is to contract whole-set equipment project. In addition, we supply the consultant and service for the related technology and information; research, design, develop, motorcycle and its accessories, construction material, timber, chemical material and product, textile product and plastic product. Moreover, we handle the import & export of goods and technology and operate the business of processing according to provided materials/drawings/samples, compensation trade, counter trade, transit trade, contracting overseas projects, providing labors and services and tendering and bidding for construction project and equipment, Set up joint ventures and organize joint manufacturing with foreign corporations, which greatly widen our scope of services for clients More+