THDS Hot Axle Box Detector (HABD) system is the flagship product of HTK Railway Technologies Co., Ltd. The system is designed to work under harsh railway environment for measuring temperature of axle boxes when the train is passing by the site. 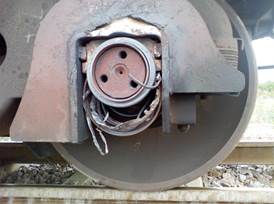 In the past decades, HABDs have been proven to be an effective solution for preventing trains¡¯ derailment. They are now extensively installed and operating in all major railway networks in the world and playing vital roles in safeguarding railway transportation. So far, VEIC Technology has installed over 2500 HABDs in China Railway, South Africa Railway (nation-wide), NSW Railway of Australia and Metro Rail of Hong Kong.

THDS HABD is the latest model developed on the base of VEIC¡¯s HTK-499 HBD since 2010s. Both hardware and software are upgraded comparing to its predecessor, HTK-499 HBD. 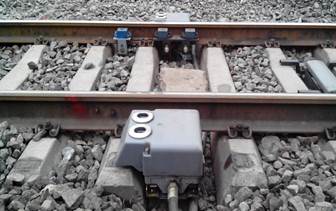 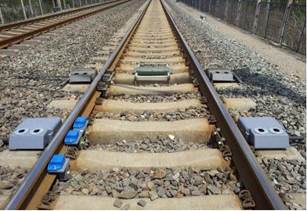 The wayside sensors includes temperature sensors X 4 (usually called scanners), wheel sensors X 4 (or 5 in case of bi-direction operational), and associated wires & cables, scanner boxes and brackets. All of the equipment is installed on to the rails.

Scanners provide to measure the temperature of axle boxes through collecting the infrared energy radiated from the axle boxes. There are two types of scanners. One type is the thermistor scanner that contains a thermistor sensor applicable for detecting a train with speed lower than 120 KM/H.

The other type is the MCT scanner containing a Mercury Cadmium Telluride (MCT) photon conductive sensor that works more reliable than the thermistor sensor and suitable for detecting faster trains (above 120 KM/H) thanks to its quick respond speed. 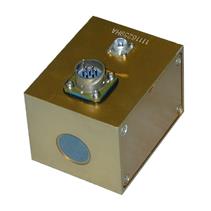 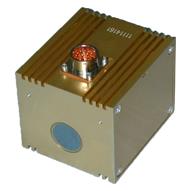 Two scanners will be fit into one scanner box that is called Dual-scanner Configuration (DSC). Both scanners provide to measure the temperature of one axle box. The scanner boxes are installed on two brackets that directly clamped on two rails. 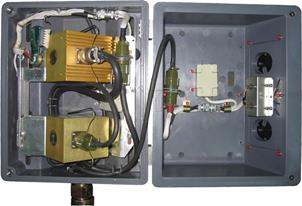 In DSC, the two scanners can be either two thermistor ones (THDS-B), or two MCT ones (THDS-C), or a combination of a thermistor and a MCT (THDS-A).

The scanner that is far from rail is defined as outer scanner (OS) and the other is inner scanner (IS) that is closer to the rail.

Both scanners are set with an elevation of 45¡ă from level. See figure 6 below. 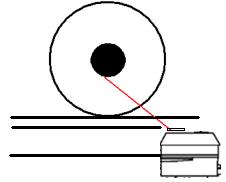 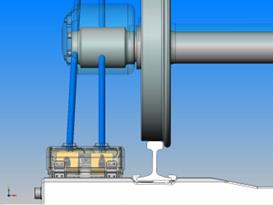 From the above figure, DSC will spot on two places on an axle box, journal head and center, so it makes the measurement reliable and accurate to avoid missing any hot axle box.

The wheel sensors (WS) in THDS-X HABD are of passive type without requiring power supply. Each wheel sensor contains a piece of permanent magnetic steel winding with wires. A steel object closing to the device, like a wheel, will trigger it to generate a signal. The WS is to be mounted on a bracket that is clamped directly on the rail. 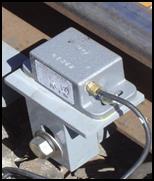 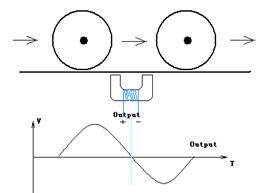 The wheel sensors on a HABD site are classified as outer WS and inner WS. The outer WS is installed about 50 meters away from inner WS which task is to detect a train¡¯s presence and then wake up the system. Where the system is operational only on single direction, one outer WS #1 is required. In case of bi-direction operational, two outer WS #1 and #5 are needed at each direction of track, UP and DOWN.

There are three inner wheel sensors WS #2, #3 and #4 with a fixed space from each other. The task of inner WS is to count and record axles¡¯ footprints so as to 1) figure out a train¡¯s consist and calculate the train¡¯s speed, and 2) allocate axle signatures to scanners¡¯ collections for purpose of locating bearing temperatures by axles and vehicles.

Only two inner WS work whilst the third one is a redundant. In case of one of the working WS is failed, the third one will automatically take its place for axle counting.

One detector computer associating with one LCD monitor,

One AVI reader (optional) and,

The HABD system will be in a sleep mode when the track is vacant. The system only carries automatic self-check and scanner¡¯s self-calibration through measuring the reference temperature at a configurable time interval that is normally set as five (5) minutes.

When a train approaches the HABD site, and the train¡¯s first wheel rolls above the outer wheel sensor (WS#1 or #5, depending on the direction (up or down) the train comes from, the wheel will trigger the outer wheel sensor which will then wake up the system. The HABD system will stop automatic self-check and ¨Ccalibration and be in a ready state to detect the coming train. All the components are power on and the flappers and shutters are open that are operated and controlled by the CTB inside the control box.

When the train¡¯s wheels roll above WS #2 and #3, the scanners start to measure the temperature on axle boxes. WS #2 and #3 counts the axles.

The signals from both scanners and wheel sensors will come into PPB inside the control box in cabinet. After being initially processed by PPB, the signals will be sent up to the ADB for being converted to digital signals that will be processed by the IPC.

After the train passed the site, the detector computer starts to process the signals collected from the scanners and wheel sensors. Detection results are displayed on a LCD monitor and transferred to the railway operator. The data processing takes only a few seconds subject to length of the train. After all the train data is processed, the system returns to sleep mode and waiting for the next train. 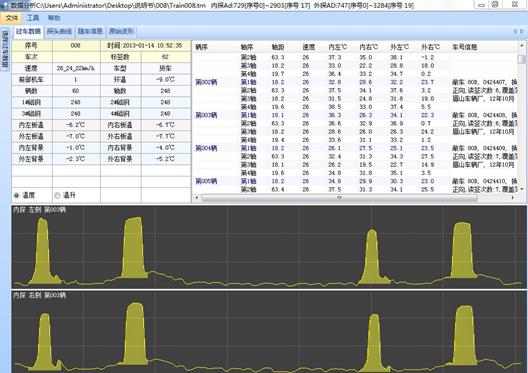 In case of no hot axle box, the system will send a normal train report to CTC including the following information.

¨¹  Train information incl. train speed, train running direction (up or down); number of vehicles in the train fleet, types of vehicles (wagon, passenger, locomotive or unknown) and type of bearings (roller or friction);

In the event one or more hot axle box is detected, a train report containing alarm will be sent to CTC. In addition to the above information contained in a normal train report, the following alarm information will be provided.

¨¹  Location of the hot axle box in the train fleet by vehicle number counted from the first vehicle after locomotives (excluding locomotives), axle number in the vehicle and left or right side;

¨¹  Absolute value of the temperature of the hot axle box; 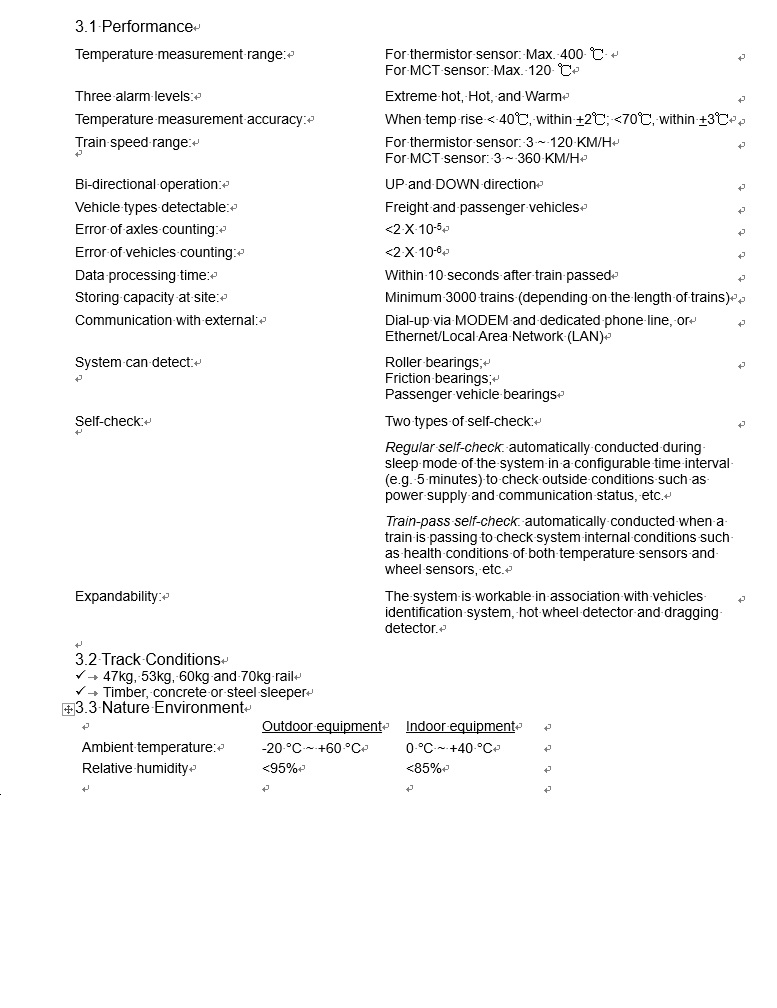 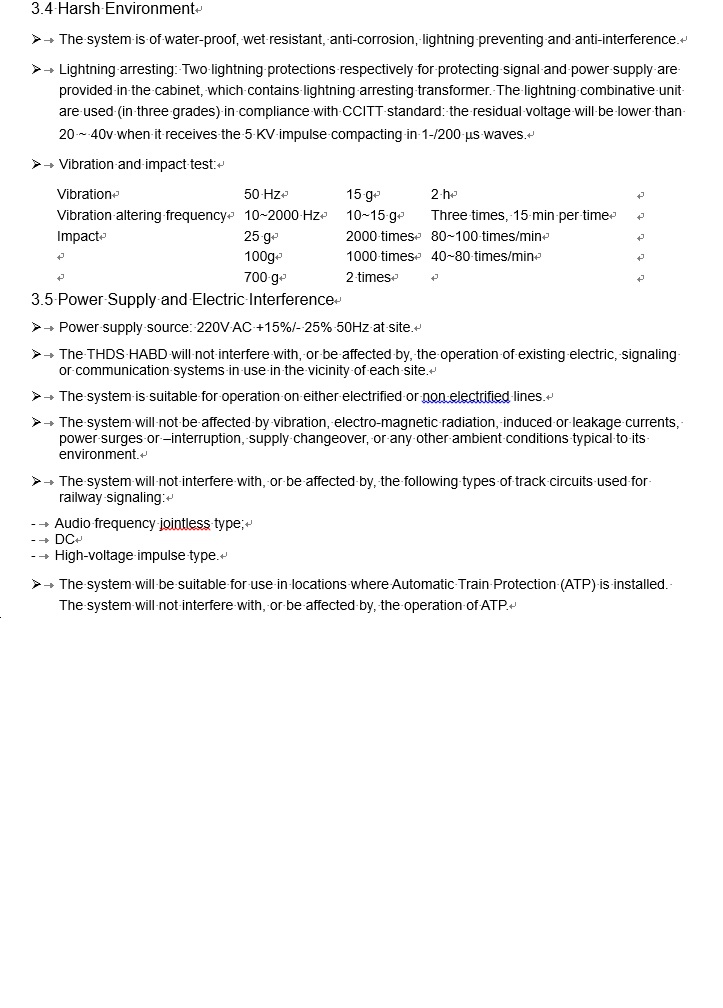 HTK Rail¡¯s products are all proven ones and accredited by ISO9001 QC system. With world class technologies and quality, in additions to leading sales in China, HTK Rail products have been exported to South Africa, Australia, Iran, Viet Nam and Hong Kong.
More+