Exports of China＊s mechanical and electrical products grew by 18.6 percent year on year in July 2021 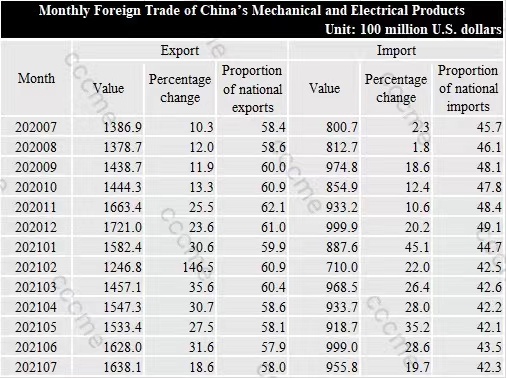 Export Maintains Prosperity
In July alone, China’s export in mechanical and electrical products reached US$ 163.81 billion, up by 18.6 percent from a year earlier, and marks an increase of 30.2 percent from the pre-epidemic level in 2019, realizing the double-digit positive year-on-year growth for thirteen consecutive months since July 2020.

In July, the year-on-year growth rate of export value of the major commodities of mechanical and electrical products were double-digit generally, and the rate of motor vehicles was of three digits, while the export quantity and value of mobile phones decreased by 23.3% and 9.2% respectively due to the higher cardinality.

Import Remains Sound
In July, the import increased 19.7 percent year on year to US$ 95.58 billion, and up by 22 percent over the same period in 2019, realizing the year-on-year added value of more than US$ 90 billion for five months and the double-digit growth rate for eleven months in a row.

Data Source: www.customs.gov.cn
Please refer to the link below for the latest info: