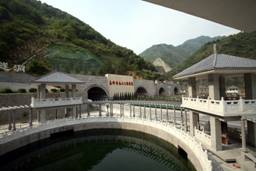 The 18.4 Km-long Qinling Zhongnanshan Road Tunnel is the longest highway twin mountain tunnel across mountain in the world on June 30, 2007. It was started in 2002 and was finished in 2007. CREC independently constructed 49% work of the project.


China Railway predecessor was founded in March 1950 of the General Administration of PRC Ministry of Railway Engineering and Design Bureau, Ministry of Railways in 1958 into the basic construction of Administration, July 1, 1989, to form China Railway Engineering Corporation , since May 2003 under the management of SASAC, the central large backbone enterprises. In September 2007, the overall restructuring of China Railway Group Limited was founded in December of that year 3 and 7 respectively in Shanghai and Hong Kong-listed.